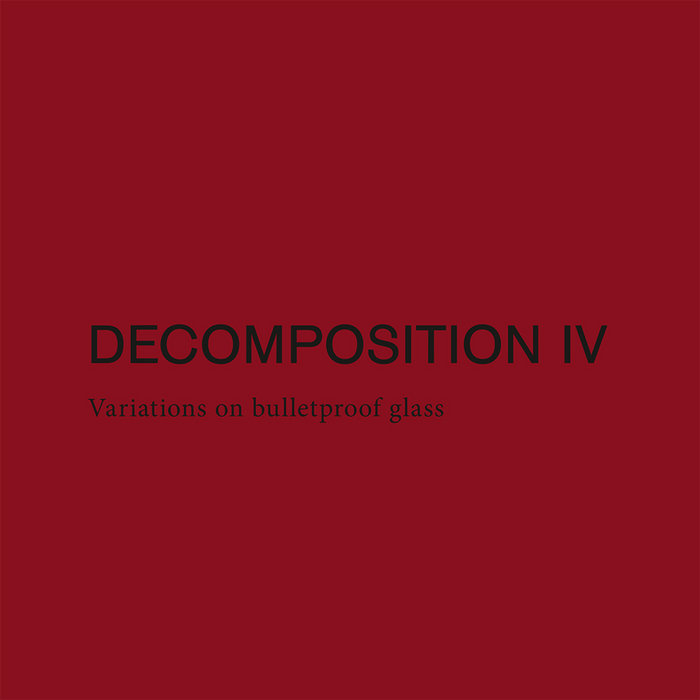 For the fourth part of their DECOMPOSITION series the duo kutin | kindlinger recorded waves which were transmitted through a bulletproof glass pane while it was exposed to major physical impacts. Peter Kutin arranged a work strictly based on these samples: sonic fragments that
document a process of vast physical destruction. What we hear on this album is still music (the Variations), which has clear tangents with different genres (ranging from electroacoustic experiments to broken beats), but sets its own unique mood and intonation. The pieces develop only to fall apart again in the most ear-thrilling manner … this is broken music - assembled in times of uncertainty.

kutin | kindlinger employed special microphones (accelerators) originally designed as sensors for use in crash tests of cars. These tools, with superior capabilities in comparison to standard microphones, detected a
myriad of unique textures within the infra- and the ultrasonic field, frequencies that reside beyond the range of the human aural perception. DECOMPOSITION IV is based on these signals.

Metaphorically, kutin | kindlinger view the glass pane as a display. The titles on the album refer to our society, which is intrinsically linked to the screen and somehow lost in the labyrinth of information. The music’s aggressive sonic gestures and its dramaturgical development guarantee
that the listener will feel insecure at points. As kutin | kindlinger state – and rightly so – DECOMPOSITION IV is a piece about the impossibility of safety.

About kutin | kindlinger
kutin | kindlinger work with sound and its possible extensions. Over the last decade they have realised a wide and highly-acclaimed array of sonic and sound-based interdisciplinary projects. The duo consequently seeks friction and its potentials, psychological twists in the relationship of sound – image – object. Therefore, they often utilise or develop technical prostheses to expand our limited human perception. kutin | kindlinger’s works received several awards and honourable mentions – among others, the renowned Karl-Sczuka Award for their radiophonic composition Desert Bloom (in cooperation with Christina Kubisch) or the prize for best sound design at the Diagonale Film Festival for Nikolaus Geyrhalter’s latest film Homo Sapiens. Their latest work DECOMPOSITION IV premiered live as an AV-show at the 2017 edition of LUFF (Lausanne Underground Film and Music Festival) and will be on stages again in 2018.
kutinkindlinger.com

Bandcamp Daily  your guide to the world of Bandcamp

Featuring Gary Bartz, 5 years of Rhythm Section Intl and an LP of the week by Nicolas Jaar